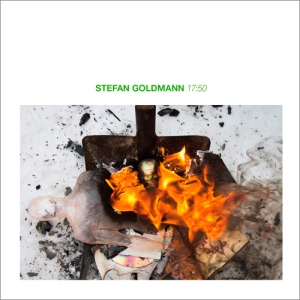 “If you don’t add something to a note, it dies”
(Miles Davis)

De-tuning notes has been central to house and techno since the early days in Chicago. In ’17:50′ this bitter-sweet sound turns systematic: the whole Western harmonic standard is thrown overboard and replaced by pitch systems that yield beautifully alien yet incredibly catchy melodies, bass lines and chords. It is probably the first new concept of melodic organization to enter house music since the days of acid.

In a field of music whose innovations seemed to have come to an end, pitch bending opens up radically fresh possibilities. Tones never stand still but are bent for a maximum of expression. ’17:50′ moves through real-world micro-tonal systems without ever sampling any ‘ethnic’ sources.

These tunings have been tried and tested for centuries from Sofia to Bandung and that’s why they rock a party even with the silliest hooks (something academic Western avant-garde tunings never accomplished). As an approach to sampling, the album’s innovation lies in extracting just one single parameter: pitch information. All sound design has been built independently from scratch on hardware (both, analog and digital) with an array of synths, analog drum machines and loads of dirty distortion. ’17:50′ is as much about pitch going crazy as about unleashing a rough, vivid hardware sound. Bend the pitch and the mind will follow.

Musikexpress (D) With each release Goldmann adds a new chapter to electronic music. There is hardly any other producer who better merges danceability with avant-garde craziness. *****

Resident Advisor (UK) Stefan Goldmann’s productions don’t sound like they’re coming from the same universe as practically everything else on the shelves.

Tagesspiegel (D) What Stefan Goldmann does today is minimalistic, but also playful. His techno isn’t just danceable – it is elaborate. We will probably never hear anything boring by him.

Zitty Magazin (D) It’s a bit of a musical revolution.

TAZ (D) It is absolutely no surprise that Stefan Goldmann manages to produce such an innovation. He is one of techno’s brightest minds. 17:50 works like a techno record, but sounds completely different.

Textura (CDA) The Berlin-based DJ/producer goes his own way, carving out an idiosyncratic path that’s his and his alone. Though nominally techno, his music is distinguished by an ever-imaginative take on the form. It’s definitely club music but of a distinctive kind produced by a creator who’s exceptionally imaginative, endlessly curious, and, one presumes, never happier than when he’s bringing a project to fruition.

Fact (UK) Stefan Goldmann’s spirit of inquiry is alive and well on 17:50.

BeatsAndBeyond (NL) A unique example of intelligent electronic music that far exceeds the boundaries of techno. Intriguing from beginning to end, it reveals new facets upon each spin. Highly recommended.

Wire Magazine (UK) Roughness with pitch is allied with roughness of timbre and an irreverent, even at times clownish feel. This means thin, bleepy synths, bitcrushed and distorted drum loops sounding like a pauper’s Daft Punk. […] We have the dubious pleasure of cheesy Arabian microtonal mimicry in Adem.

Splice (USA) Meow – as if someone is naughtily pulling on the robot cat’s tail.

Berlin 030 (D) The shining example of an electronic musician who doesn’t just bounce his head, but actually thinks with it.

Beat Magazin (D) It’s not an intellectual construct that keeps one arrested to 17:50, but its crazy funk. This album will be proved right on the dancefloor.

BBC Radio Ulster (UK) Something really otherworldly about the harmonics in this record, it’s totally unique in its approach and delivery. A real rarity these days.

Juice FM (UK) Off-kilter techno weirdness sounding like nothing else out there.